As an organization that serves the Latino community, we cherish and celebrate the richness and diversity of our Latino heritage. In the following stories, Latinos share their love for their culture, traditions and heritage.

Patricia Arévalo-Alas learned the value of hard work at an early age. Growing up in a provincial capital in El Salvador, Arévalo’s parents toiled long hours to provide for her and her younger sister.

“My mom and dad got up early and came back home late at night,” says Arévalo, who manages the LAA’s middle school program. “I have many memories of my father working on my birthday, which falls on New Year’s Eve, and showing up past 6 in the evening with a cake.”

Arévalo’s parents, who themselves worked since they were very young, drilled in their daughters a strong work ethic and the value of education. By age 15, two years after her family moved to the United States, Arévalo was working at a restaurant so she could pay for her own phone. “My dad wanted me to understand that I had to work hard to pay for it,” she explains.

Arévalo worked long hours through high school and college, at one point working 52 hours a week at a day care and moving rental cars at the airport while attending Georgia State University full time. She graduated college in May. Working hard continues to make her happy.

[su_pullquote]“I love that people of Hispanic heritage are so hardworking,” she says. “Those of us who have moved to the U.S. we know that here we can achieve anything we set our minds to as long as we work hard. Part of who we are is working hard. We are Latinos.”[/su_pullquote] [su_divider top=”no” size=”1″]

Evelyn Reyes has lived all her life in the U.S., but from a young age she forged a strong connection with Guatemala, the country where her mom is from.

Reyes has spent countless summers in Puerto Barrios, a tropical port city on the Caribbean Sea “surrounded by beaches” and known for its colonial-era fort, Castillo de San Felipe, on the Río Dulce, she says.

“Since I was 3 years old and all the way through college, I would spend every summer in Guatemala,” says Reyes, who grew up in Arlington, Va. “For my mom, it was important that I learn about my culture and spend time with my grandparents, aunts and cousins.”

Despite the heat and humidity in eastern Guatemala, Reyes, who is the LAA’s development coordinator, still enjoys walking through the streets of Puerto Barrios to shop at the mercado (food market) and traveling along the coast on a motor boat.

[su_pullquote]“Everybody is outdoors,” she points out. Reyes also loves the food (plátano frito and empanada de frijol) and listening to bachata, merengue and other rhythms from Latin America. She can’t wait to visit again this Christmas. “I feel very Guatemalan,” she says. “I love Spanish and I love speaking it every day.”[/su_pullquote] [su_divider top=”no” size=”1″]

When she emigrated from South America at age 10, Marie Cruzado Jeanneau felt like she didn’t belong in this country. The native of Lima, Peru, struggled between preserving her cultural identity and embracing the opportunities her new country offered.

It was not until Cruzado attended high school in Norcross and joined a Peruvian dance troupe that she felt a sense of belonging.

“I see my dancing as a healing process,” says Cruzado, a junior at Oglethorpe University. “Performing traditional dances from Peru has allowed me to reconnect with my roots.”

Even after six years, Cruzado, an intern with our youth programs, is still reveling in her love for dancing. She never took classes growing up, but says that in elementary school students were “forced” to dress in traditional dresses and perform to commemorate Peruvian independence.

This year, she and five Peruvian friends, united by their “nostalgia for Peru,” created their own dance group and they perform around Atlanta and Athens various types of autochthonous dances: dance from the coast, the mountains and the jungle (“costa, sierra y selva”), as well as AfroAmerican. The name of her group is “Aklla Sumaq,” which is Quechua for “chosen for their beauty,” and all six dancers wear traditional dresses handmade in Peru.

[su_pullquote]“Dance is a very important part of Peruvian culture because it reflects the various civilizations that make up Peru, going as far back as the Mochicas and Incas and including the Spanish and AfroAmerican influences,” Cruzado says. “Our dances are a fusion of all these cultures.”[/su_pullquote] [su_divider top=”no” size=”1″] 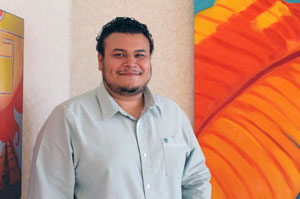 All his life, Rigoberto Rivera has been surrounded with family. When he was a toddler, he would rock with his grandfather under a pecan t…ree in Matamoros, Mexico. Birthdays and other celebrations such as baptisms have always been family affairs attended by a multitude of cousins, aunts and uncles. At 24, he cherishes living in his parents’ home in Dacula, with his mom, dad and younger siblings.

Rivera, who was born in the U.S. and has spent most of his life in Georgia, says he loves the family dynamic that is integral to Mexican culture.

“You are not raised by just your parents, you are raised by your entire family,” says Rivera, who works in the LAA’s youth program.”

[su_pullquote]“Growing up, I was taught to have respect for all the adults in my family, from my parents, to my abuelos and abuelas, to my tíos and tías. My whole family is close, not just my immediate family. I am proud of the fact that we want to share together not just the birthdays, baptisms and holidays, but also our daily lives.”[/su_pullquote]

Above: Rivera at the LAA; at age 5 (wearing the tux) in Matamoros with his grandmother and cousins; at his graduation from Georgia Gwinnett College with his parents. 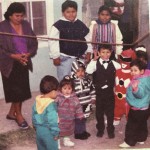 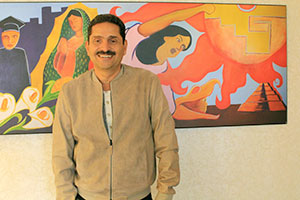 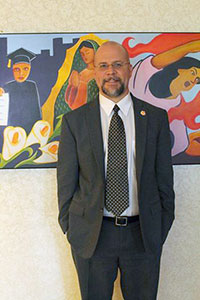 For David Schaefer, being Latino means embracing a multitude of cultures. Born to an Argentinian father who was raised by German parents and to a mom who grew up in the South, Georgia-born Schaefer has created an identity that reflects this hybrid.

“I grew up being part of three different cultures,” says Schaefer, the LAA’s director of policy and advocacy.

It all started when his grandfather migrated from Germany to Argentina in the early 1930s. He met his German wife in a colony of foreigners that cultivated mate, an herb used to make Argentina’s national drink. The couple had a son, Diego, who at age 19 left for the United States to study engineering at Georgia Tech. He met his American wife, Flo, in Georgia and they raised two kids in a German-Argentinian-American household.

Schaefer grew up listening to German legends and illuminating the Christmas tree with white candles. He did not learn Spanish until he was in college.

As an adult, Schaefer has embraced his blended heritage and even added more. His wife is from Venezuela, born to an Afro-Cuban father. The couple have a 4-year-old son who speaks Spanish and English and is already taking German classes.

“We consider ourselves a Latino family,” he adds. “For me, being Latino means recognizing the fullness of the Latino experience and understanding that Latin American countries have also been shaped by immigration.”